Realising SRHR for Young Bangladeshis, Part 6: Of Secrets and Fears 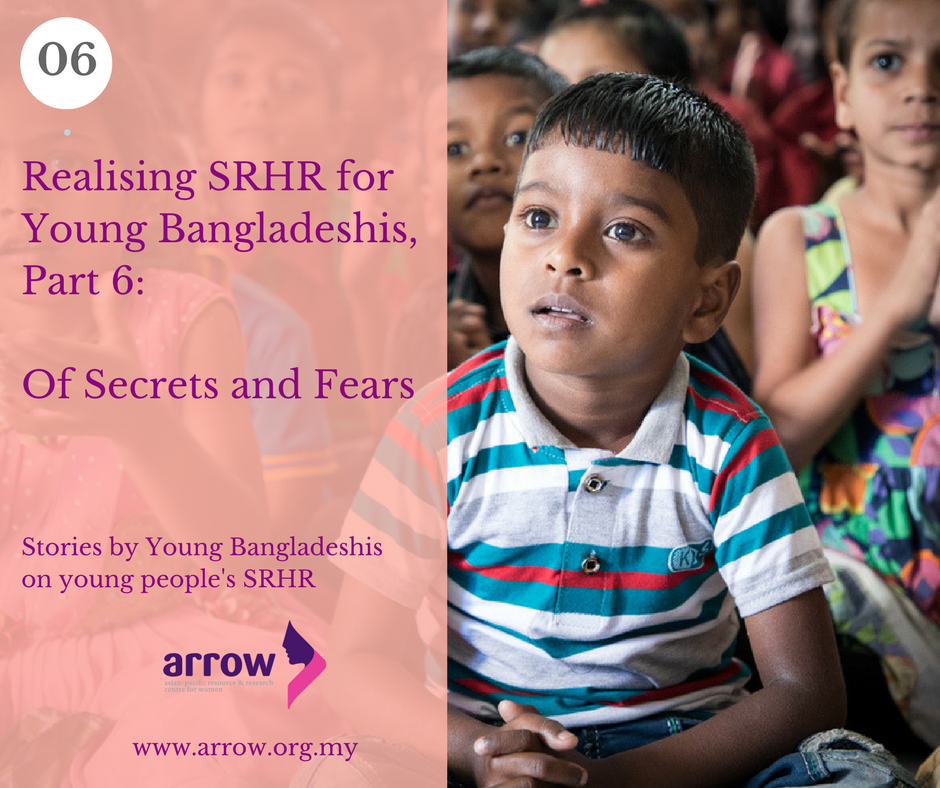 This post is the sixth in a series of eight stories by young Bangladeshis that illustrates the barriers to young people’s sexual and reproductive health and rights in the youth-led CSO report for Bangladesh’s Universal Periodic Review. These stories were collected by ARROW and Dance4Life. Photo is used for representation only. Read the first part here, second part here, third part here,  fourth part here, and the fifth part here.

Sakib is a young Muslim man living in Bangladesh, born to a homemaker mother and a government official father in Dhaka. It was when Sakib was 14 years old did he realise that he was attracted to men. Because he was living in a suburban area near Dhaka where he must constantly hide his sexuality, he could not talk to anyone for advice and to share what he was going through. With limited access to the internet, he was lacking knowledge in terms of safe sex methods too. While he at least knew about the use of condoms, he did not find it important to use contraceptives while he explored his sexuality in his teenage years, as he was not engaging in sex with women.

So, given the location in which he was living in, how does someone like Sakib get to date or meet other people like him?

In recent years, Facebook has become an extremely popular communication medium, especially among the youth. Today, the social media site sees around 30 million subscribers from Bangladesh alone, with over six million adolescents between the age of 13 to 18 years, and 14 million young men and women between 18 to 24 years of age. Sakib owns, besides his regular Facebook profile, a fake profile which he uses to connect with other gay men. Through Facebook’s search function, Sakib found a few groups that support gay men to connect with each other. He became an active member of these groups, which are also used by gay men to find dates and attend events that are posted on these groups. These Facebook groups became his only way to connect with like-minded people from his community.

Last year, Sakib came across a post in one such group which invited people to an open discussion on safe sex and protection, hosted by an undercover LGBTQ activist group in Dhaka. Sakib went to the event mainly because he was interested in meeting other people from his community and wanted to socialise with them. However, Sakib obtained more than just contacts and acquaintances; as he learnt more and more of the different methods of protection and the possible consequences of unsafe sex unfolded before him, he grew more and more remorseful of his past nonchalant ways. Now, Sakib knows better and has decided to be mindful of using protection while having sex.

This becomes a major barrier in terms of access to basic health services, including sexual and reproductive health care. In Sakib’s case, this barrier manifested itself in the presentation of contraceptives for mass media consumption; part of the reason why he was not being careful about his sexual activities was because advertisements on TV only shows the use of contraceptives for straight couples only. Given the already existing gaps in implementation of comprehensive sexuality education (CSE) in Bangladesh, this means that people with diverse sexual orientation and/or gender identity face double marginalisation when it comes to their sexual and reproductive health and rights (SRHR).

As a great starting point, the country needs to provide a clear, insclusive and dignified definition in the law of what constitutes the ‘third gender’ and also clarify the distinction between ‘intersex’ and ‘transgender’ and other gender identities, by enacting legislation that protects and promotes the fundamental rights of individuals with diverse gender identities. Governing bodies also need to ensure SRH services for everyone, irrespective of their sexual orientation and/or gender identity and widen the ambit of national health policies and the National AIDS/STD Programme (NASP) and other healthy policies and programmes to include all gender diverse and sexually diverse groups, to ensure their equitable access to sexual and reproductive health services.

After the discussions on safe sex and protection, Sakib felt the need to get himself checked for HIV. However, he is afraid of the check up because he believes they will ask a lot of questions about his sexuality or somehow makes the connection that he is gay. Due to the way Section 377 of the Penal Code criminalises all sexual interactions that do not result in reproduction and are considered ‘against the order of nature’, Sakib is afraid that he will be discriminated, harassed, and violated should the truth ever comes out.

It has been over a year, and still he has not mustered up the courage to go for the checkup yet.

ARROW collaborated with the Right Here Right Now Bangladesh Platform (RHRN-BD) and the Sexual Rights Initiative (SRI) to submit a youth-led CSO report in October 2017 for Bangladesh’s 3rd UPR. The report focused on the barriers to young people’s sexual and reproductive health and rights (SRHR) in Bangladesh. For the first time in the country’s UPR process, a CSO report has been developed through engagement of young Bangladeshis through a collective process. Read the report here!