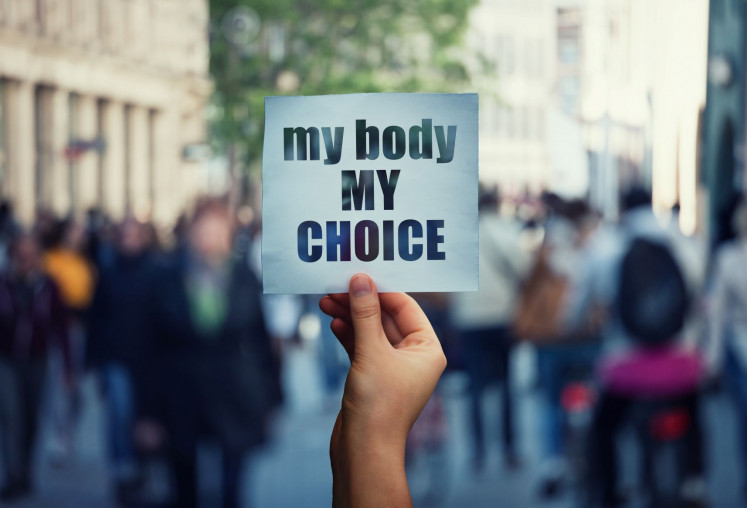 Abortion – safe or unsafe, legal or illegal – has existed throughout history. Yet, it continues to be the most sensitive and controversial issue in reproductive health.

The WHO has disclosed that an average of 73.3 million – safe and unsafe – abortions took place worldwide per year between 2015 and 2019, with the rate of abortions being higher in developing regions than in developed ones.

Riznawaty Imma Aryanty, reproductive health program specialist at the United Nations Population Fund (UNFPA) Indonesia, said the issue of abortion was always sensitive, not only in Indonesia but everywhere in the world, even in countries where it was broadly legal, with high stigma regarding abortion.

“In Indonesia, abortion is legal for medical indications and in rape cases. However, due to sensitivity of the terminology, people tend to avoid using the word abortion,” she told The Jakarta Post by email on Tuesday.

“Women may hide the fact that they have attempted to terminate [unintended] pregnancies, so they try different ways and seek help only when there are complications. The problems are very complex.”

Earlier, she gave a presentation at the 10th Asia Pacific Conference on Sexual Reproductive Health and Rights (APCRASRH10), held online on Sept. 28, the date an NGO has declared as International Safe Abortion Day.

The eight session, titled Safe Abortion and SRHR in Asia Pacific, is part of a series organized by the steering committee of APCRSHR10, UNFPA and Citizen News Service (CNS).

In Indonesia, legal abortions must be carried out by certified doctors at a health facility designated by the health minister. Each patient should be accompanied by counselors who provide psychological assistance before, during and after the abortion, as well as during pregnancy, should the patient decide to cancel an abortion.

Such restrictions make it hard to carry out institutional safe abortions. According to the WHO, the main cause of abortion is an unmet need of contraception, with more than 40 percent of unplanned pregnancies worldwide resulting from failure to use contraception or the ineffective use of contraception.

In the Indonesian capital of Jakarta, an illegal clinic in which more than 900 pregnancies were terminated since 2018 was discovered by the Jakarta Police earlier this year – pointing to persistent demand for abortions.

At the conference, Imma presented a study from her Ph.D. thesis on abortion hospitalization that she had conducted jointly with Lejla Amira Syahdan in Yogyakarta in 2009 and revisited in 2019, before she joined the UN’s sexual and reproductive health agency.

Imma said abortion hospitalization was defined as all inpatient and outpatient treatment related to spontaneous or induced abortion, also known as post-abortion cases.

“I am not revisiting the magnitude of abortion hospitalization in 2019 but looking at the patterns. It is more or less the same. Most cases are categorized as spontaneous abortion,” Imma said.

She said there were challenges to hospitalization, since the International Classification of Diseases 10 (ICD 10) for pregnancy with abortive outcomes distinguishes between spontaneous abortion and abortion for medical indications.

“In countries where abortion is highly restricted or stigmatized, most cases will be reported as spontaneous abortion,” she said. “However, high rates of hospital admission for abortion-related complications may be an indication of widespread practices of unsafe abortions.”

In the 2019 study, she used data from the Health Care and Social Security Agency (BPJS), while for the 2009 study, she had also interviewed medical staff.

In her thesis, Imma recalled a story she had gathered from a medical record of a 19-year-old student, who had gone to a hospital for constipation but found out she was pregnant instead. She was unmarried, and her boyfriend had left town.

Unable to tell her parents, she decided to take the matter into her own hands. She first tried drinking traditional medicine, but that did not work.

She later went to nearby city, Surakarta, to see a physician who turned out not to have a license. In that place, a busi (kind of cervical dilator) was inserted and she was given oral medication. She suffered bleeding when the pregnancy was two weeks old, but the pregnancy persisted.

She went to see other doctors, four different ones, to no avail.

“The similarity of the stories is that women have to risk various unsafe ways of abortion before finally getting the treatment,” Imma said.

In Indonesia, she said, the most pressing reproductive health issues were related to maternal mortality that remains high at 305 per 100,000 live births and unmet needs for family planning that increased in the past 5 years to 11 percent.

These two indicators, she said, were closely related, with a study showing that family planning alone could prevent maternal deaths by up to 40 percent by preventing high-risk pregnancies and unintended pregnancies.

“The prevention of unintended pregnancies can also prevent unsafe abortion, which has been associated with high maternal death rates,” Imma said.

The UNFPA predicts there could be up to 7 million unintended pregnancies worldwide because of the COVID-19 crisis, with potentially thousands of deaths from unsafe abortions and complicated births due to inadequate access to emergency care.

“Guttmacher [Institute] estimates a shift of 10 percent from safe to unsafe abortions in ASEAN due to pandemic,” said Sivananthi Thanenthiran, executive director of ARROW, a nonprofit Asia-Pacific resource and research center for women.

Despite the work at the global level, she said, there was a gap in establishing reproductive rights, in particular, the right to safe and legal abortion, as an indicator of gender equality at the country level.

“Mortality due to unsafe abortions still remains high at 13 percent of all maternal deaths in Southeast Asia and South Asia, respectively,” said Thanenthiran.

“Governments should provide accurate information on medical abortion to help women make informed decisions and minimize risks to women’s health. With proper information and guidance, medical abortion is a life-saving healthcare service. In the midst of a pandemic, it may be the most viable option for women seeking to end unwanted pregnancies.”