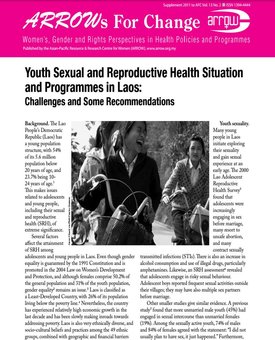 The Lao People’s Democratic Republic (Laos) has a young population structure, with 54% of its 5.6 million population below 20 years of age, and 23.7% being 10-24 years of age. This makes issues related to adolescents and young people, including their sexual and reproductive health (SRH), of extreme significance.

Several factors affect the attainment of SRH among adolescents and young people in Laos. Even though gender equality is guaranteed by the 1991 Constitution and is promoted in the 2004 Law on Women’s Development and Protection, and although females comprise 50.2% of the general population and 31% of the youth population, gender equality remains an issue. Laos is classified as a Least-Developed Country, with 26% of its population living below the poverty line. Nevertheless, the country has experienced relatively high economic growth in the last decade and has been slowly making inroads towards addressing poverty. Laos is also very ethnically diverse, and socio-cultural beliefs and practices among the 49 ethnic groups, combined with geographic and financial barriers and relatively poor health infrastructure, impact on health outcomes.